Greg Polychronidis competition ended in dissapointment. His Japanese opponent took the first end 4-0 but Greg continued to fight! He eventually lost 6-1 and the man from Japan moved on into the semi final. On the adjacent court Jamie McGowan was taking on his toughest BC3 opponent to date. Yejin Choi (Korea) was many peoples favorite going into the competition. Choi took the first 2 ends to take a 4-0 lead but McGowan played a superb 3rd end to take a 5-4 lead into the last. A disappointing final end for the Brit meant that Choi could take full advantage and deserved his passage into the semi final taking the final end 2-0 (6-5 overall).

Daniel Michel (Australia) took an early lead against Hansoo Kim in their BC3 cash. Kim played 2 wonderful ends to take the lead and held on for the victory. Paddy Wilson (GBR) also took a 1-0 lead in his game against Howon Jeong (Korea) but once again the Korean fort back to take a lead into the final end. Jeong then played a tactful final end and won 5-1.

It was routine victories for  Pattaya Tadtong (Thailand) and David Smith (Great Britain) in their games in the BC1 against Wonjong Yoo (Korea) and Lima (Brazil) respectively. The game of the round was certainly the tie between Lukas Balazi and Panagiotis Prokopios Soulanis. Soulanis went behind early on but took the 3rd end 6-0 and held on for the place in the semi final.

In the BC4 event, favourite Yuk Wing Leung lost the opening end 2-0. He went on to win the next 3 ends 2-0, 2-0 and 3-0 to take overall victory. Stephen McGuire (Great Britain) also went behind only to stage his own come back. He went 3-1 up after the 2nd end and played a magnificent final ball in the 3rd to move to 5-1. Robert Durkovic (Czech Republic) was unable to respond with McGuire closing out the game 6-1.

2 points from Pornchok Larpyen (Thailand) in the final end was not enough to earn him victory against Sungkyu Kim (Korea). The Korean won 5-4.

BC2 Abilio Valente (Portugal) gave everything right up until his last ball against Hidetaka Sugimura (Japan). A superb last ball snatched a deserved point from the last end but the Japanese athlete forfeited his last 2 balls and accepted the 4-2 win to advance into the next round.

Worawut Saengampa (Thailand) managed to defeat favourite Maciel de Sousa Santos (Brazil). The Brazilian struggled and the Thai athlete was able to join his country man (Watcharaphon Vongsa) in the semi finals after he upset Nadav Levi’s (Israel) birthday celebrations by beating him 6-1.

The game between Jesus Oseguera (Mexico) and Soyeong Jeong (Korea) could have gone either way. Only 1 point was awarded in each end with Jeong collecting the 3-1 win.

Our board took the opportunity to have their annual face to face board meeting during the championships on Monday.… 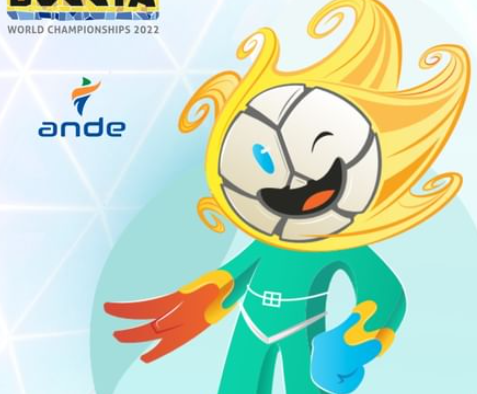 The Rio de Janeiro 2022 World Boccia Championships has a mascot!! Cool, cheerful, fun and loves to be with…