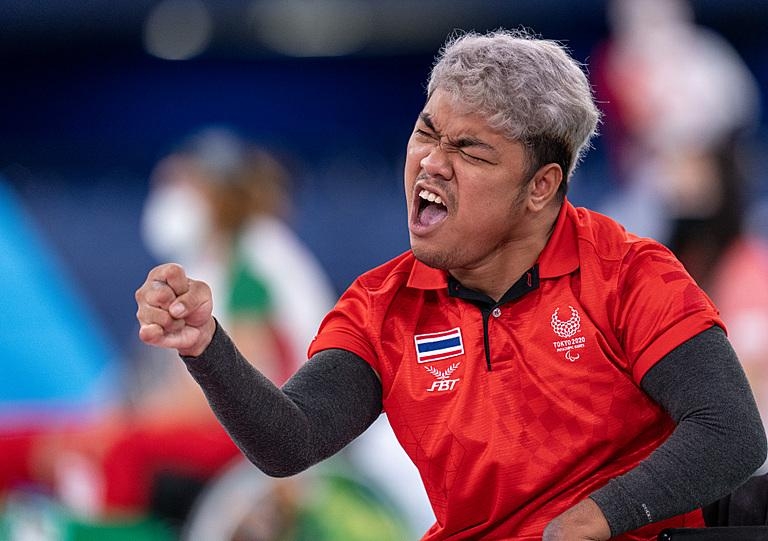 Eight days of amazing Boccia competition have come to an end in Tokyo and it ended in style with extremely close and exciting matches.

Watcharaphon VONGSA led Thailand to a third consecutive gold medal in the BC1/BC2 team event with an 8-2 victory over China at the Ariake Gymnastics Centre on Saturday.

Thailand had trailed 2-0 after the second end against a China team who had won all four of their group games – including beating Thailand.

VONGSA came up big with some superb throws in the final two ends as the Thais pulled away. The individual BC2 silver medallist put his team’s victory down to their focus under pressure.

“It was our concentration,” the 30-year-old said. “We tried to control our focus in this competition. We set the target to win it three times. The world will know more about the Thai boccia team now.”

VONGSA said the close-knit atmosphere within the team has been a key to their success through the years.

“We have worked hard to achieve the good target. The relationship within the Thai team is like a family. We have harmonisation and communication. When we have a problem, we communicate to solve it and go together.”

Thailand beat Japan 8-3 in their semifinal to earn a shot at another title, having also topped the podium at London 2012 and Rio 2016.

Japan edged Portugal 4-3 to capture the team bronze, rallying from a 2-0 deficit after the second end.

In the pairs BC3 event, Republic of Korea narrowly defeated Japan in a tiebreaker to claim the gold medal. With the score at 4-4 after four ends, Rep. Korea scored a single point in the tiebreaker to prevail.

Watch the highlights of Day 8 here.

We are sure that the Tokyo 2020 Boccia competition has created new lovers of the game which is due to the fantastic performance of the athletes and also in part to the broadcasting of many matches live to the world. We thank the Tokyo 2020 organisers, the IPC, the wonderfully friendly volunteers and the performance of our athletes and officials for such a great competition.

We now head down the road to Paris 2024 but before then, there will be much more Boccia on display, including at the World Championships in December 2022 in Rio de Janeiro. See you there!

The BISFed Referee Committee have been working on developing the procedures undertaken by officials at the equipment checks. The…
Events General News 21 April 2015

Countdown to the second BISFed event of 2015