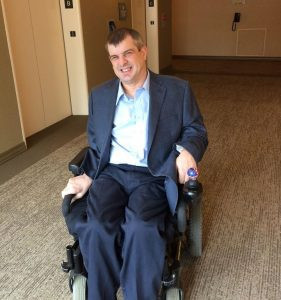 James Thomson has stepped down from the role of President of USA Boccia at the end of 2020 and BISFed would like to thank him for all his hard work.

James, a former boccia athlete who won a silver medal at the Barcelona 1992 Paralympics in the mixed individual and also coached, became President in 2015, when USA Boccia was founded. During his term as President, USA Boccia hired its first full-time paid Executive Director; added a part-time paid Compliance Manager to execute and oversee organizational governance and compliance and secured its first Independent Board Director. James will remain on the Board in the role of treasurer until his term expires at the end of 2022.

The USA Boccia Board has elected Tim Dalton to succeed James Thomson as new President, moving on from his previous role as USA Boccia secretary.

James Thomson said he was “confident in his [Dalton] abilities to guide USA Boccia forward” and pointed to Dalton’s “exceptionally long history” of boccia involvement in the United States.

BISFed President David Hadfield thanks James for his great support and dedication to Boccia and BISFed and for having taken USA Boccia successfully on the road to independence.

Information has been sent to all federations detailing the requirements for the first BISFed General Assembly. The General Assembly…
General Membership News 9 December 2014