Canada stormed into the first day of the BISFed 2018 World Boccia Championships’ team and pairs event, overcoming favourites and World number ones Slovakia.

It was a huge upset with the Canadians ranked ninth.  Earlier in the day, they also beat Russia who currently sit in the number eight spot.

Elsewhere in the BC4s, there was drama in the Germany v Great Britain clash which saw Boris Nicolai pitted against Stephen McGuire. The last time the players met was in the last 16 stage of the individual competition with the German forcing McGuire out of the medal hunt.

There was a refereeing controversy in the final end. Britain just missed the window in which to submit a protest and ultimately lost 3-2

In the BC3s, Slovakia suffered another disappointing showdown when they were beaten 2-6 by China, who are ranked 10 places below them.

There were other lower ranked BC3 pairings who enjoyed similar success in toppling the favourites. France overcame World number one duo Brazil with a staggering 9-2 final score.

Brazil were able to claw a victory over Portugal in their second pool match but only after being pushed to tie-break. Meanwhile the British BC3s performed worthy of their World number three status, claiming wins over Colombia and Singapore.

It was a fairly straightforward affair in the BC1/BC2 team event with the expected powerhouses competing true to form.

Thailand demonstrated its dominance with two comfortable victories over Spain and South Korea. However, Great Britain were able to overcome Brazil who are ranked third in the world.

Claire Taggart said the home crowd has been a huge boost:

“I was actually really nervous about the crowd being so close in a team event as I am out in the wing box. But it was one of the best experiences I’ve had especially with close friends and family so nearby. 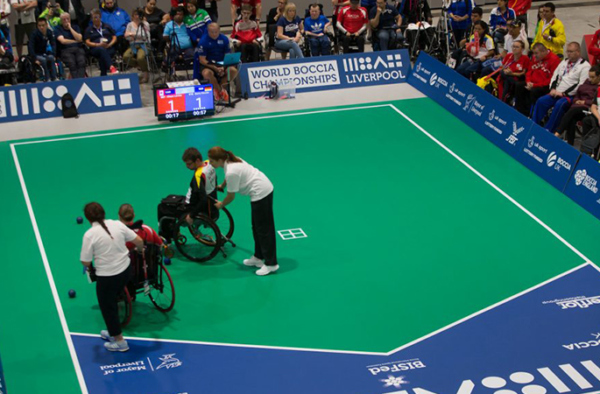