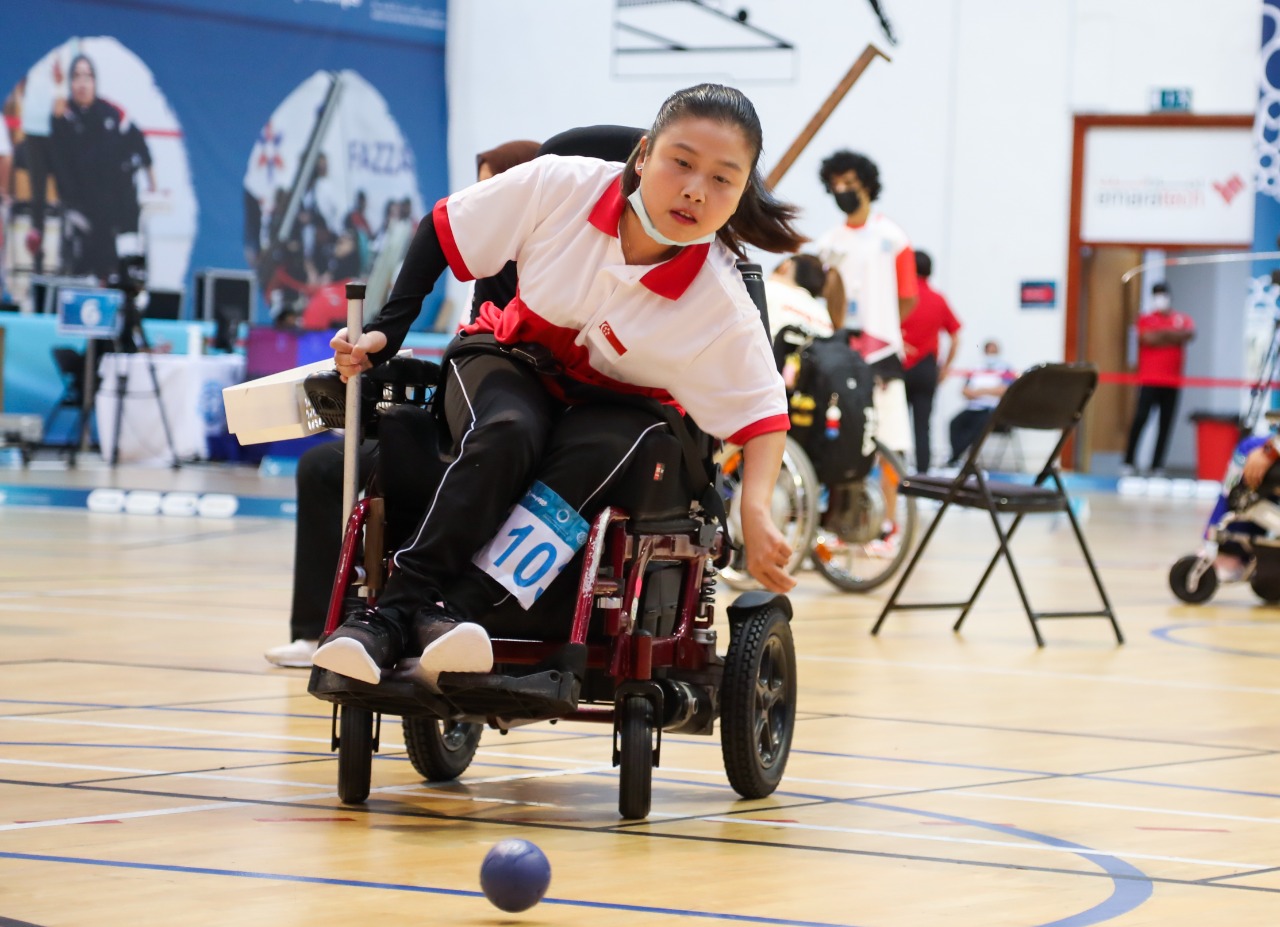 Thailand’s top female player Nuanchan Phonsila was already thinking about Paris 2024 Paralympic Games. Her focus is on improving her current rankings and reaching the number one position in the female BC4 category.
At the ongoing 7th Fazza- Dubai 2021 World Boccia Asia Oceania Championships, Phonsila is among the top contenders in women’s BC4 event with one win in Pool B. She was confident of getting a good result here.
The Rio 2016 Paralympic bronze medallist was also excited over World Boccia’s new rule of separate events for male and female players and felt that this has opened more medal winning opportunities for women players. “Earlier, the competition was difficult. This is a new experience now and I am enjoying it competing against women. I am confident of winning the gold here and jump in the world rankings,” said the 44-year-old Phonsila, who is currently placed 12th in world rankings.
The Dubai 2021 Championships is the first international championships where the new rule has been introduced.
The seasoned star also felt her experience will put her in good stead against her younger opponents in major championships. “Apart from my experience, training will be important to do well in major events.”
With one point each, Phonsila and South Korea’s Myungsoon Lee face each other in their final pool match.

Focus the key for Karen Kwonk
Likewise, Hong Kong’s BC2 female player Hoi Ying Karen Kwok stayed focused on her goal of winning the gold. The Beijing 2008 gold medallist will face her compatriot Hiu Lam Yeung in the semi-finals, who topped Pool B.
“I just want to win tomorrow’s match and move a step closer towards my goal. I am very excited about playing against women players now. This is a good opportunity for all women Boccia players in Hong Kong and the world,” said Karen Kwok, who is accompanied by four other female players in the team.
Hong Kong coach Lau Wai Ki said the team is already preparing the women players for Paris 2024. “Hong Kong has more female players than male in the sport. So, this is a very good chance for our players to grab this opportunity, play more championships and win medals.”
Singapore coach Chew Zi Qun felt that the new rule has ended the domination of male players in the individual events. “This will help us develop more women players in the sport. It definitely benefits all those nations who didn’t have many female players. For Singapore, we always had more female player than male in the sport.”

Paralympic stars in semi-finals
Tokyo 2020 Paralympic champions including Thailand’s Watcharaphon Vongsa and Hidetaka Sugimura of Japan have won all their three Pool matches and made it to the semi-finals of the male BC2 individual event at the Shabab Al Ahli Club.
In male BC1 event, South Korea’s 2018 Asian Para Games silver medallist SungJoon Jung and Hong Kong’s John Loung made it to the last four with two wins each in Pool stage.
Singapore’s Yee Ting Jeralyn Tan and Juni Syafiqa Binte Jumat topped the Pools in women’s BC1 event and made the semi-finals. Jeralyn Tan will face South Korea’s YoonJeong Oh, while Binte Jumat meets Japan’s Yuriko Fujii.
In female BC3, Thailand has two players in the semi-finals with
Ladamanee Kla-Han facing Hong Kong’s Yuen Kei Ho, while Somboon Chaipanich faces Korean Yejin Choi.
Top UAE player Raisa Al Falasi has lost both her Pool matches in female BC4 and looked set of not making it to the Knockout stage, which begins on Tuesday.

General Assembly documents have been distributed to all of our members. The meeting will be held in Hong Kong…

The BISFed Competition Committee have made a few minor adjustments to the BISFed World Rankings. These changes have had…